Welcome to part 8 of the ODX Menopause Series. This post reviews natural approaches to a smooth menopausal transition. These strategies incorporate healthy lifestyle and stress management practices that can be beneficial throughout the lifespan.

Though hormone replacement therapy tends to be the “go to” in allopathic medicine, it’s possible to resolve some discomfort through more natural means as a first step. It’s equally important to address a menopausal woman’s increased risk of chronic disease by encouraging nutrition and lifestyle patterns that optimize health as well as assist in symptom management.

A 2016 EMAS position statement proposes a holistic framework for the management of a healthy menopause (HM). Healthy diet and lifestyle, physical activity, stress management, and education are the cornerstones of the HM approach. The HM model incorporates a multidisciplinary team that ultimately addresses social and psychological function, as well as physical function and morbidity. A variety of healthcare disciplines should be represented including naturopathic, osteopathic, chiropractic, as well as physiotherapy, homeopathy, and traditional Chinese medicine.[1] Prevention of chronic disease is a significant focus of this holistic approach.

Clearly, menopause can’t be prevented but its negative effects can be managed, and chronic disease risk can be reduced. Basic evidence-based approaches to disease prevention include: [2]

More than half of menopausal women seek complementary and alternative approaches to managing menopause and perceived effectiveness is greater than 60%. Approaches include[3]

Dehydroepiandrosterone sulfate, the sulfated form of DHEA, is the most abundant steroid in circulation with levels peaking between 20 and 30 years of age at a level of approximately 370 ug/dL (10 umol/L).[4] It is an important precursor to testosterone and estrogen, including in the postmenopausal period.[5] DHEA supplementation may have a positive effect on body composition, cognitive performance, sexual function, and cardiovascular symptoms though these benefits may vary due to ethnicity.[6] 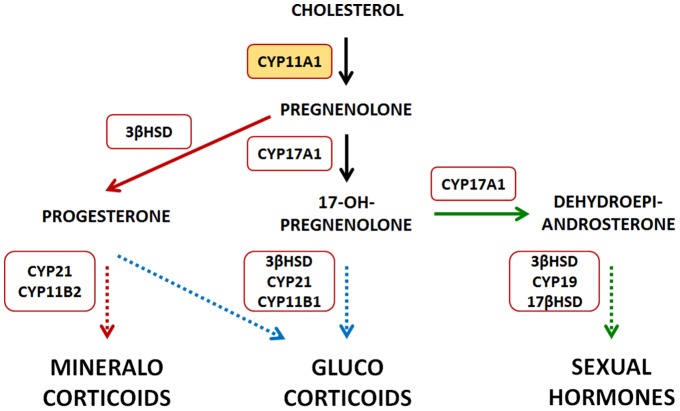 Neunzig, Jens, and Rita Bernhardt. “Dehydroepiandrosterone sulfate (DHEAS) stimulates the first step in the biosynthesis of steroid hormones.” PloS one vol. 9,2 e89727. 21 Feb. 2014, doi:10.1371/journal.pone.0089727 This is an open-access article distributed under the terms of the Creative Commons Attribution License/

DHEAS is the most frequently studied adrenal androgen in perimenopausal studies. Though circulating DHEAS decreases by approximately 80% from age 20 to age 70, it begins to rebound in women transitioning through menopause though levels can decrease again postmenopause. Evaluation of the SWAN study data noted ethnic differences in circulating DHEAS with the highest levels occurring in Chinese subjects, and lowest levels in African American and Hispanic subjects. Higher BMI was associated with lower DHEAS in general. Changes in DHEAS levels correlated with shifts in circulating testosterone and estrogen.[7]

Higher levels of DHEAS were associated with enhanced physical function and quality of life, and fewer symptoms of depression.[8]

According to the position paper of the Polish Menopause and Andropause Society, DHEA supplementation is effective or likely effective in postmenopausal women with:[9]

[7] Lasley, Bill L et al. “The relationship of circulating dehydroepiandrosterone, testosterone, and estradiol to stages of the menopausal transition and ethnicity.” The Journal of clinical endocrinology and metabolism vol. 87,8 (2002): 3760-7. doi:10.1210/jcem.87.8.8741