In part 4 of the ODX Insulin Series we take a look at ways you can reverse insulin resistance.

Schematic representation of risk factors for T2DM with convincing or highly suggestive evidence. 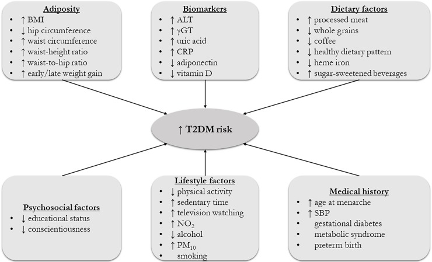 What we can do to make that U-turn and reverse course?

It is vitally important to identify blood glucose dysregulation before the pathology of diabetes sets in. Early assessment and intervention is indicated as insulin resistance is associated with abnormal lipid profiles and obesity as early as childhood and adolescence. [1]

Overeating in general can promote insulin resistance though a variety of factors.

Intake of animal fat, which is high in saturated fat, appears to be most closely associated with poor glycemic control and diabetes. [6]

However, insulin resistance can be improved and even reversed with a healthy approach to weight reduction, calorie restriction, and regular physical exercise. [8] [9] [10] Elevated blood pressure can also be improved with this approach.

One six-month program studied the effects of lifestyle education and modification on 160 individuals with pre-diabetes (fasting glucose 100-124 mg/dL 5.6-6.9 mmol/L). The study compared a one-time general review of lifestyle changes and prevention of type 2 diabetes…

to a more intensive structured program that incorporated education about pre-diabetes, diabetes, risk factors, and complications, diet improvements, and increased physical activity in the form of lectures and workshops that took place at baseline and again 3 months into the study. [11]

A healthy approach to weight maintenance will incorporate 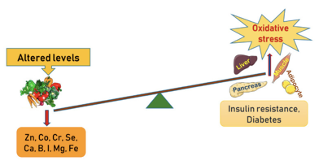 Schematic presentation of the altered levels of trace elements and minerals in the manifestation of oxidative stress in amplifying pathways towards insulin resistance and development of diabetes.[13]

Chromium (trivalent chromium) is a trace element that is appears to be particularly important for glucose tolerance and insulin function. [14]

Researchers note the importance of maintaining chromium sufficiency and recommend replacement in the event of insufficiency. [15] However, some researchers recommended more clinical trials before recommending chromium supplementation. [16]

Other micronutrients that play an integral role in glucose homeostasis include vitamin E (tocopherols and tocotrienols), nicotinamide, B6, B12, folate, and vanadium. [17]

Omega-3 fatty acids may also play an important role in mitigating insulin resistance and improving glucose metabolism due to their anti-inflammatory actions and support of mitochondrial function. [19]

Ideally adequate amounts of micronutrients can be obtained from the diet. However, if soil depletion, excessive processing, gastrointestinal disorders, or poor diet quality lead to insufficient intake then judicious supplementation may be indicated.

So, the bottom line is, insulin resistance and even pre-diabetes can be rerouted and reversed with diet and lifestyle changes. We just need the will and the way.

Up Next - Optimal - The Podcast: Episode 3 Insulin Resistance

Check out our Series on the HOMA2 Calculator!