This is part 1 of a series of articles we are posting on Insulin Resistance covering the biochemistry and physiology of insulin resistance (IR), IR and the road to diabetes, assessing IR, and steps to reverse IR.


The Biochemistry and Physiology of Insulin

Let’s have a brief look at the biochemistry and physiology of insulin.

Insulin is a peptide hormone produced and secreted by the beta cells of the Islets of Langerhans in the pancreas. It has anabolic actions that lower blood glucose and affect lipid and protein metabolism. Insulin promotes synthesis of glycogen, protein, and lipids, and also promotes cell division and growth. [1]

Insulin has a direct effect on [2]

Pancreatic beta cells are able to store a small amount of insulin that can be released quickly when blood glucose rises.

A reduction in insulin release at this point indicates beta cell dysfunction and predicts an increased likelihood of developing type 2 diabetes.[3] [4]

Insulin resistance is considered an early sign of type 2 diabetes development and is characterized by an inability to reduce elevated blood glucose in the face of normal plasma levels of insulin, a phenomenon that often accompanies chronic excess intake of calories, carbohydrates, and fats.

Physiologically, there will be a decrease in glucose uptake, glucose oxidation, and glycogen synthesis. There will also be less suppression of lipid oxidation/lipolysis.[6] Endogenous production of glucose will continue and won’t be suppressed as would ordinarily occur with normal insulin sensitivity.

Research suggests that early signs of subclinical inflammation may precede and predict insulin resistance. This appears to be especially true of hepatic insulin resistance which is associated with early beta cell upregulation. [7] Ultimately, peripheral insulin resistance is the major factor contributing to metabolic syndrome and its progression to type 2 diabetes.[8]

Insulin resistance in general has longed been recognized as a metabolic disorder and risk factor for cardiovascular disease. A detailed review from 1991 notes that [9]

At present, insulin resistance is gaining greater recognition as a comorbidity in cardiovascular disease, especially when considering:[10]

A Simplified Model Of Insulin Resistance 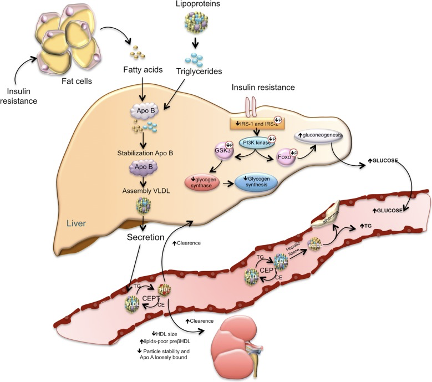 "The loss of suppressive effects of insulin on lipolysis in adipocytes increases free fatty acids. Increased free fatty acids flux to the liver stimulates the assembly and secretion of VLDL resulting in hypertriglyceridemia. Triglycerides (TG) in VLDL are transferred to both HDL and LDL through the action of cholesteryl ester transfer protein (CETP). This process results in a triglyceride-enriched HDL and LDL particle. Triglyceride-enriched HDL is more rapidly cleared from the circulation by the kidney, leaving fewer HDL particles to accept cholesterol from the vasculature. In the glucose metabolism, the insulin resistance results in decreased hepatic glycogen synthesis, owing to decreased activation of glycogen synthase, increased hepatic gluconeogenesis, and glucose delivery by the liver"

Insulin resistance is also considered a major risk factor for the development of dyslipidemia, hypertension, and atherosclerosis, and a likely risk factor for stroke and coronary heart disease.[11]

Remember, insulin resistance may be the first sign on the road to type 2 diabetes and other undesirable destinations.

Don’t be afraid to ask for directions, make a U-turn, and get back on the road to optimal health.

Up Next - Insulin Resistance Part 2: IR and the Road to Diabetes